Super Herb of the Week- Dill! 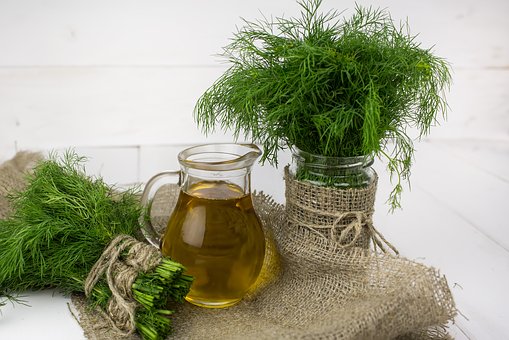 I can never talk enough about herbs. They are little powerhouses of goodness straight from Mother Nature’s Medicine cabinet! You should add them to every meal- fresh is best but non-irradiated freeze dried or air dried will do also.

Today I want to talk about dill. Its not an herb that people use in abundance and sometimes not at all. This is usually because we don’t know what to put it in. But first, where did we get this herb? Here is what In Depth info.com has to say:

Dill, sometimes called dill weed (anethum graveolens), is part of the Apiaceaefamily that includes plants with hollow stems, called umbellifers. Other plants in this family include carrots, fennel, cilantro and parsley. The Latin name anethum gravolens comes from the words “ano” and “theo” meaning upwards running and “gravis” and “oleo” meaning strong smelling. The common name dill comes from Old Norse word “dilla” and means to calm or soothe.

Dill originated in southern Russia, the Mediterranean, and Western Africa. It has been used as a medicinal herb for at least 5,000 years. The Ancient Egyptians used dill as a soothing medicine, and it was also used in aphrodisiacs and to ward off witches. The Greeks used dill as a symbol of wealth. The Romans believed that dill brought good fortune. The Romans also used dill leaves in the wreaths they made to recognize athletes and heroes. In ancient times soldiers would apply burnt dill seeds to wounds to help them heal.

Dill is mentioned in the Bible (Matthew 23:23) as an herb that was tithed. This fact means that at that time dill was already being cultivated, because only plants that were actively cultivated were used in tithing. In “old wives tales” dill, hung over the doorway or entrance to the house (and over babies’ cradles) was a symbol of love and would act as a protection against harm. Additionally, a cup of tea brewed from the leaves and seeds of the dill plant would take away the evil power of a witch. Because of its strong flavor, dill has also been used for centuries to enhance the flavor of vegetables, meats and seafood.

Why should we use this amazing herb? Organic Facts reports the following benefits:

The health benefits of dill include its ability to boost digestion, as well as provide relief from insomnia, hiccups, diarrhea, dysentery, menstrual disorders, and respiratory disorders. It is also good for oral care and can be a powerful boost for your immune system. It can also protect you from bone degradation. It is also an anti-inflammatory substance, which means that it can protect you against arthritis.

The health benefits of dill are derived from its organic compounds, vitamins, and minerals. [3]These include powerful monoterpenes like limonene, carvone, and anethofuran, as well as flavonoids like vicenin and kaempferol. As for vitamins and minerals, as per the USDA, it has a significant amount of vitamin A and C, as well as trace amounts of folate, iron, and manganese. [2]

Dill is a relaxant, and it increases strength and urination to help in the removal of toxins, excess salts, and water from the body. Furthermore, it is a carminative (helps remove excess gas), antispasmodic (prevents cramps), and an antiflatulent substance. [14] It may have anti-cancer potential but further studies are needed to explore it. It stimulates lactation (galactagogue) and endocrine secretions, enhances libido due to the presence of arginine and last but not the least, it ensures bone and dental health since it is a good source of calcium.

Grab some dill today and be creative!