Superfood of the Holiday- Pomegranates! 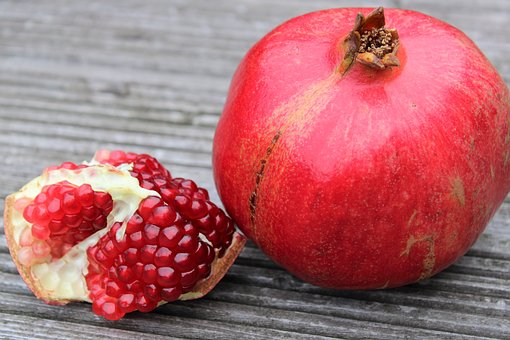 Juicy tart holiday yumminess! Add pomegranates to your list. This tiny seed is packing superfood nutritional value and flavor no one can complain about.

Lets look at the history of this superfood from The Reluctant Gourmet:

Depending on where you look for information, pomegranates might be called the “fruit of the underworld,” the “fruit of paradise,” or more simply, the “seeded apple.” Those who prefer the more exotic names are likely to revere the fruit for its inherent link to sensuality. One look at the hundreds of glistening crimson seeds inside each pomegranate, and it’s no wonder why people have been associating them with fertility for thousands of years. Just a single taste of the pomegranate has often been considered enough to tempt even the gods and goddesses into extraordinary actions.

Shrouded in mystery and centuries of folklore, the pomegranate is one of the most revered fruits in existence. Tales of pomegranates whether they are found in Greek myths, Biblical texts, or ancient manuscripts are spread throughout the world. It seems that no country or culture has been able to evolve without at least a passing reference to this exotic and delicious.

Although the earliest pomegranate bushes grew wild and uninhibited throughout the Middle East, they have long been cultivated for sale and personal use. Armenia, in particular, has a detailed history of interaction with the pomegranate, with actual fossilized remains evident from as far back as 1000 BC.

Romans called it the “Punic apple” and cultivated it extensively. When it was brought to Spain around 800 AD, it became the national emblem and was even the basis for the naming of the city of Granada (derived from the pomegranate’s Spanish name).  Some tales even link the term “grenade” to the pomegranate, as the eighteenth century French compared the spreading of the pomegranate’s seeds with the scattering of debris from the weapon’s explosion. It has since become most popular in the South and in California, where the climate and the love of all things delectable have worked enormously in the pomegranate’s favor.

Here is what Organic Facts has to say about the health attributes of pomegranates:

The health benefits of pomegranates are innumerable and what makes them special is that apart from being healthy, they are delicious too. Pomegranates have anti-oxidant, anti-viral, and anti-tumor properties and are said to be a good source of vitamins, especially vitamin A, C, and E, as well as folic acid. This amazing fruit consists of three times as many antioxidants as both wine or green tea.

Wondering what pomegranates are good for? They are so useful in maintaining effective and healthy blood circulation that several doctors suggest eating pomegranates to regain strength after a long illness. Pomegranates have been traditionally used for clearing up the skin and reducing inflammation, as well as for the treatment of sore throats. Other health benefits include being a great cure for heart-related problems, stomach disorders, cancer, dental problems, osteoarthritis, anemia, and diabetes.

The amazing health benefits of pomegranates can be enjoyed by consuming them in several ways. You can take them in the form of a juice or you can consume the seeds, syrup, paste, nectar or concentrate. Pomegranate syrups are used for treating damaged cartilage and they also protect babies from brain damage incurred during birth.

Pomegranates contain high levels of antioxidants called flavonoids. These flavonoids are known to be effective in counteracting various cancer-causing free radicals. People that face a high risk of prostate and breast cancer should start drinking pomegranate juice, as it will help them reduce the risk of developing cancer. Regular consumption of pomegranates can reduce the PSA levels in the body and aid in the fight against existing cancer cells as well, says the American Cancer Society through a research. For diabetic patients, drinking pomegranate juice can reduce the risk of various coronary diseases. Along with this, there is a reduction in the hardening of the arteries, which inhibits the development of various heart diseases.

They help control aging problems like wrinkles as well, thus providing people with a youthful and glowing skin. These juicy fruits can help women overcome depression symptoms during menstruation, especially post-menopausal depression. The advantages and health benefits of pomegranates are countless, so get your hands on some of these juicy fruits and start reaping the benefits.

The moral of this story is- add pomegranates to your holiday feast!!