SuperFood of the Week- Celery 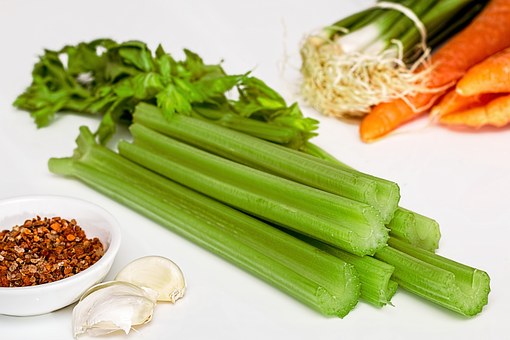 When you mention celery not too many people have strong opinions. Most can take it or leave it. Maybe after you read what this little powerhouse veggie can do, you will be its greatest cheerleader!

Celery, which has the scientific name Apium graveolens, is a vegetable in the plant family called Apiaceae. Celery is believed to be the same plant as selinon, mentioned in Homer’s Odyssey about 850 B.C. Our word “celery” comes from the French celeri, which is derived from the ancient Greek word. Use of celery as food was first recorded in France in 1623. For about a hundred years thereafter its food use was confined to flavorings. In France and Italy, by the middle of the 17th century, the little stalks and leaves were sometimes eaten with an oil dressing.

The benefits of celery begin with it being an excellent source of antioxidants and beneficial enzymes, in addition to vitamins and minerals such as vitamin K, vitamin C, potassium, folate and vitamin B6.

Administered as an anti-hypertensive agent in folk medicine for centuries, celery continues to prove that there are many cardiovascular benefits. In recent pharmacological studies, celery demonstrates both antioxidant and anti-inflammatory activities that help improve blood pressure and cholesterol levels, as well as prevent heart disease.

Eating celery every day may reduce artery-clogging cholesterol (called LDL or “bad” cholesterol). Less cholesterol means less plaque on the artery walls and a general improvement in heart health. Sign me up!

Celery contains phthalides, flavonoids, and polyacetylenes. These cancer-fighting components detoxify carcinogens. Celery also contains coumarins that enhance the activity of certain white blood cells, which can effectively stave off cancer as well.  These antioxidant components seek out free radicals floating in the body and damaging organs and neutralize them before they can result in the development of serious conditions like cancer. Mother natures medicine cabinet at work.

Celery seeds can be found either in whole seed form, extract form or ground-up. They have impressive health benefits on their own, as they help to lower inflammation and to fight bacterial infections. In some parts of the world, celery is grown primarily for its beneficial seeds, which are actually a very small type of fruit. They also help in the elimination of uric acid which in excess can cause gout. This makes it good for people with bladder disorders, kidney problems, cystitis, and other similar conditions. Celery seeds also assist in preventing urinary tract infections in women.

This powerhouse veggie is rich in vitamin C, which greatly helps to boost the strength of the immune system. Stimulated by the activity of other antioxidants in celery, it becomes more active and efficient. Because of the high content of vitamin C in celery, eating it regularly can reduce your risk of catching the common cold, as well as protecting you against a variety of other diseases.

Not sold yet? Maybe its best attribute is the ability it has to compliment and draw out flavor in the dishes it is added to. Where would Thanksgiving stuffing be without it?

This week and every week you can reap the benefits of this powerhouse veggie in Mom’s Chicken Salad by ordering off  our Lunch Box Menu. They only come on Tuesday’s go don’t procrastinate!