Superfood of the Week- Colorful Cauliflower! 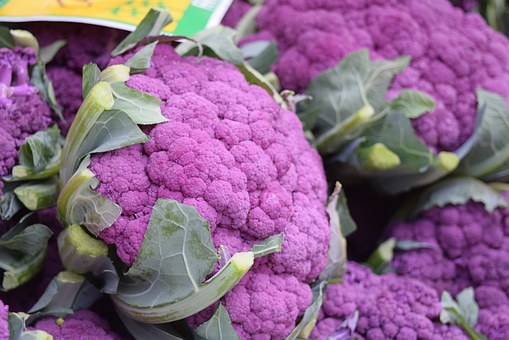 Cauliflower is a much overlooked vegetable, mild and almost tasteless makes it very versatile and easy to flovor any number of ways. Dis you ask where we got this wonderful food? Here you go:

It is a cruciferous vegetable that belongs to the Brassicaceae family, which includes broccoli, kale, and cabbage. It derives its name from the Latin word ‘caulis‘ which means cabbage with a flower. The florets on the head of the cauliflower, also known as curd, are tightly clustered and consist of immature flower buds attached to a central stalk. To protect the flavor and softness of the cauliflower heads, they are kept away from sunlight to prevent the development of chlorophyll pigment and over-maturity.

It is considered to be ancient Asia but it re-emerged in the Mediterranean region, Turkey, and Italy in 600 BC. Around the mid-16th century, this vegetable achieved recognition in France and Northern Europe. Today, India, China, Italy, France, and the United States are among the top producers of cauliflower throughout the world.

Cauliflower is available in four major groups: Asian, Italian, northwest European biennial, and northern European annuals, represented by more than a hundred varieties. Apart from white, it also comes in several other colors mentioned below.

Green: Green cauliflower is referred to as broccoflower. It can be found in a normal curd-shaped form as well as in a spiky variant called Romanesco broccoli.

Why should we fill our plates with this amazing veggie? Here is what Organic Facts has to say:

Cauliflower contains vitamin C, manganese, and other potent antioxidants that help in imparting nourishment to the body. It also contains phytochemicals, called indoles and glucosinates, namely glucobrassicin, glucoraphanin, and gluconasturtiin. These components stimulate cancer-blocking enzymes and protect the body cells from the oxidative stress and damage caused by free radicals.

Regular consumption of cauliflower ensures blood circulation and helps in maintaining proper functioning of the blood vessels, which can be attributed to the presence of glucoraphanin and vitamin K. Glucoraphanin is converted into isothiocyanates that activate anti-inflammatory activities and prevent the accumulation of lipids in the blood vessels. This aids in the unobstructed flow of blood, which reduces the risk of conditions like atherosclerosis and promotes cardiovascular health. Research has also proved that the antithrombotic and antiplatelet function of Indole-3-carbinol, found in abundance in cauliflower, contributes significantly towards a healthy heart.

Studies have shown that indole-3-carbinol present in cauliflower has chemopreventive and anti-estrogen effects that help in hampering the growth of cancer cells. Research has provided supporting evidence for the fact that consumption of brassica vegetables such as cauliflower assists in reducing the risk of various types of cancers such as lung, bladder, breast, prostate, ovarian, and cervical cancer.

Vitamin C present in cauliflower helps to better absorb iron in the blood. This helps to increase the hemoglobin count in the body.

Cauliflower contains vitamin C, which plays an important role in the production of collagen that protects the joints and bones from inflammatory damage. Also, it contains vitamin K, which may help in preventing bone loss in both men and women.

It is rich in vitamin C and antioxidants and thus, is effective in reducing the risk of age-related macular degeneration which can lead to blindness, particularly in the elderly. The sulforaphane protects the retinal tissues from damage caused by oxidative stress, prevents vision impairment, and various eye ailments such as cataracts.

The antioxidant and anti-inflammatory properties of the glucoraphanin and sulforaphane present in cauliflower help in reducing oxidative stress, along with the levels of LDL (bad) cholesterol. It also promotes the stimulation of HDL (good) cholesterol and lowers blood pressure. In addition to this, the fiber and omega-3 fatty acids present in cauliflower also prevent hardening of the arteries.

The potassium content in cauliflower helps in maintaining the electrolyte balance in the body, which is essential for the functioning of the nervous system in the transmission of nerve impulses and muscle contractions.

Cauliflower is rich in antioxidants and immune-strengthening nutrients. Along with other healthy components, the presence of vitamin C in it inhibits various infections and strengthens the defense mechanisms of the body by hampering the growth of disease-causing inflammation.

This is just a few of the wonderful benefits of this ordinary little vegetable that actually isn’t ordinary at all!