SuperFood of the Week- Honey 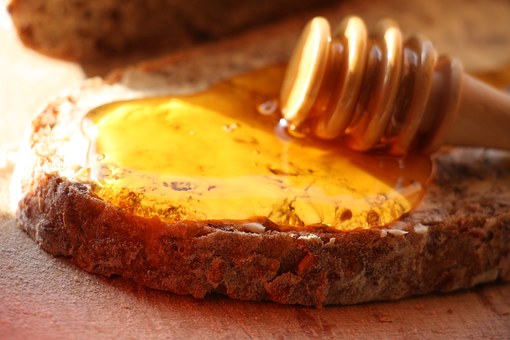 Drippy, golden yellow goodness from Mother Nature. What could it bee? Yes- honey!

Exactly how long honey has been in existence is hard to say because it has been around since as far back as we can record. Cave paintings in Spain from 7000BC show the earliest records of beekeeping, however, fossils of honey bees date back about 150 million years! Its ‘magical’ properties and versatility has given honey a significant part in history. The earliest record of keeping bees in hives was found in the sun temple erected in 2400BC near Cairo. The bee featured frequently in Egyptian hieroglyphs and, being favored by the pharaohs, often symbolized royalty.

Did you know this gentle but tenacious creature is being eradicated by pesticides? Bees are dying at alarming rates worldwide – and because bees are responsible for roughly one in every three bites of food we eat, we’re all in trouble. Why should anyone care? Well, they matter a lot more than most people would think. With summer upon us, it’s exciting to see the reemergence of some of our favorite produce, including stone fruit, peppers, sweet, juicy melons, succulent strawberries and many vegetables such as sweet potatoes. But what if the arrival of these crops each summer were to come to an end? Honeybees, among other pollinators such as bats, birds, butterflies, and bumblebees, are responsible in one way or another for the pollination of approximately 100 crops, according to Dr. Reese Halter, Ph.D., author of The Incomparable Honeybee and distinguished conservation biologist.

Of course- no honey bees- no honey! Here are just a few of the amazing benefits of raw honey:

Its benefits include the following treatments, taken from both traditional and modern medical experts.

It can be used as a substitute for sugar in many foods and drinks. It contains about 69% glucose and fructose, enabling it to be used as a sweetener which is far better for your overall health than normal white sugar. The National Honey Board refers to honey as a pantry staple.

Though it has more calories than sugar when consumed with warm water, honey helps in digesting the fat stored in your body. Similarly, honey with lemon juice or cinnamon helps in reducing weight.

In 2012 a research was conducted on 300 children of age 1 to 5 years to find out the effect of honey on nocturnal cough and sleep quality. The results published in the Pediatrics Journals showed that honey could be a preferable treatment for a cough and sleep difficulty associated with childhood upper respiratory tract infections (URIs).

According to the USDA, honey contains about 64 calories per tablespoon. Therefore, it is used by many people as a source of energy. On the other hand, one tablespoon of sugar will give you about 15 calories. Furthermore, the carbohydrates in it can be easily converted into glucose, since it is very simple for the body to digest this pure and natural substance.

Recent research has shown that honey is an excellent ergogenic aid and helps in boosting the performance of athletes. It is a great way to maintain blood sugar levels, recuperate muscles, and restore glycogen after a workout, as well as regulate the amount of insulin in the body. A study showed that consuming honey improves immediate memory in postmenopausal women to the extent which is comparable with the improvement seen after receiving estrogen plus progestin therapy (EPT). The research was published in Menopause: The Journal of The North American Menopause Society in 2011.

It has anti-bacterial and anti-fungal properties, so it is often used as a natural antiseptic in traditional medicines.

It contains nutraceuticals, which are very effective for the removal of free radicals from the body. As a result, our body’s immunity is improved against many conditions, even potentially fatal ones like cancer or heart diseases. Researcher Nele Gheldof of the University of Illinois has published a series of studies on the antioxidant property of honey and its benefits including the increased serum antioxidant capacity in humans.

Professor Dr. Nor Hayati Othman in her study about the link between honey and cancer states, “Honey and cancer has a sustainable inverse relationship in the setting of developing nations where resources for cancer prevention and treatment are limited.”  (Evidence-Based Complementary and Alternative Medicine journal, 2012)

Research studies suggest that honey may have the potential to become an anticancer agent. However, more scientific evidence is required to establish the exact mechanism and authenticity of it being used.

Significant research is being carried out to study its benefits in the treatment of wounds. These have been listed below:

Also, visit EWG.org and sign the petition to save the bees!

Note: Honey is not recommended in infants under the age of 12 months. It has been linked to botulism in the past.