Superfood of the Week- Lemons

By Dana Farrell May 1, 2019 Super Foods
No Comments 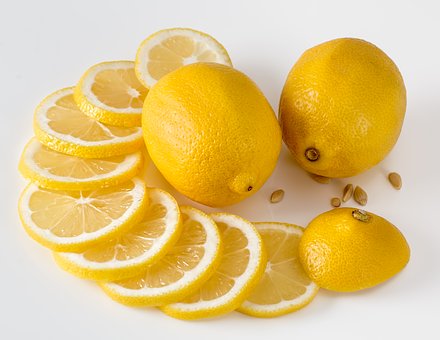 Is there anything happier than a lemon? Just looking at one brings back memories of lemonade stands and summer.

This very common fruit that grows on trees is anything but ordinary. Nature’s ray of sunshine brings a truckload of goodness to the table. The lemon is a small evergreen tree native to Asia (as well as the fruit that grows on the tree). The lemon is thought to have originated in the Indus Valley (a Bronze Age civilization in South Asia) because of a lemon-shaped earring from 2500 BC found by archaeologists in the area.

Lemon trees produce fruit all year round. One tree can produce between 500 and 600 pounds of lemons in a year!

Just look at what this tiny fruit can do for you:

1. Lemons are alkalizing for the body: Lemons are acidic to begin with but they are alkaline-forming on body fluids helping to restore balance to the body’s pH.

2. Lemons are rich in vitamin C and flavonoids that work against infections like the flu and colds.

3. Your liver loves lemons! “The lemon is a wonderful stimulant to the liver and is a dissolvent of uric acid and other poisons, liquefies the bile,” says Jethro Kloss in his book Back to Eden. Fresh lemon juice added to a large glass of water in the morning is a great liver detoxifier. Try it warm with a little stevia but you have to do it first thing. It cleans your bowels by  increasing peristalsis and helping to create a bowel movement thus eliminating waste and toxins.

4. Vitamin C in lemons helps to neutralize free radicals linked to aging and most types of disease.

5. The lemon peel contains the potent phytonutrient tangeretin, which has been proven to be effective for brain disorders like Parkinson’s disease.

6. Lemons have powerful antibacterial properties; experiments have found the juice of lemons destroy the bacteria of malaria, cholera, diphtheria, typhoid and other deadly diseases.

7. Blood vessels are strengthened by the vitamin P (bioflavinoids) in lemon thus prevents internal hemorrhage. Also, making it useful in treating high blood pressure. What is Vitamin P you ask? It is a flavonoid found in many citrus fruits that can boost the immune system.

8. The symptoms of eye disorders, including diabetic retinopathy have been shown in research to improve due to the rutin, found in lemons. What is rutin you ask? It is one of the phenolic compounds found in the invasive plant species Carpobrotus edulis and contributes to the antibacterial properties of the plant. Well – you did ask after all!

9. Lemons contain 22 anti-cancer compounds, including naturally occurring limonene; oil which slows or halts the growth of cancer tumors in animals and flavonol glycosides which stop cell division in cancer cells.

10. According to The Reams Biological Ionization Theory (RBTI), the lemon is the ONLY food in the world that is anionic (an ion with a negative charge). All other foods are cationic (the ion has a positive charge.) This makes it extremely useful to health as it is the interaction between anions and cations that ultimately provides all cell energy. Ok- wow! Who knew?

So- the moral of this story is eat lemons every day! We can help you out with that.