Tis The Season for Cloves! Yes Folks- I said Cloves!! 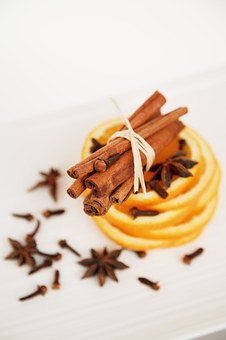 Cloves are one of what the spice world calls “The Big Four” along with cinnamon, nutmeg, and pepper and share a history of greed, bloodshed and adventure.  We don’t really think of cloves often and they do have a certain flavor not everyone loves. Most would agree they do make you think of the holidays and probably ham. This spice has a “spicy” history and deserves a place in the limelight even if just for the holiday.

From the literature of China we know that those granted an audience with the emperor in the third century B.C. were required to take a clove from a dish held by a servant and chew it before reaching the royal room, so their breath would not offend the emperor.  Popular with the Romans they were used more as a fragrance or perfume in the 1st century A.D. Ferdinand Magellan, sailed from Lisbon Portugal in 1505, and discovered a route around Cape Horn at the tip of South America.  He discovered the Spice Islands and claimed them for Portugal’s King Emmanuel.  Portugal controlled the Spice Islands and Cloves through the 1500s until they were defeated by the Dutch in 1605. One of the Spice Islands was the small island of Amboina that was thirty miles long and fifteen miles wide.  Some Scientists believe this is the first natural habitat of the clove.

Let’s get to the most important question:

Why are cloves good for us?

Cloves have been tested for their antibacterial properties against a number of human pathogens. The extracts of cloves were potent enough to kill those pathogens. Clove extracts are also effective against the specific bacteria that spread cholera.

Cloves contain high amounts of antioxidants, which are ideal for protecting the organs from the effects of free radicals, especially the liver. Metabolism, in the long run, increases free radical production and lipid profile, while decreasing the antioxidants in the liver. Clove extracts are helpful in counteracting those effects with its hepatoprotective properties.

Cloves have been used in many traditional remedies for a number of diseases. One such disease is diabetes. In patients suffering from diabetes, the amount of insulin produced by the body is not sufficient or insulin is not produced at all. Studies have revealed that extracts from cloves imitate insulin in certain ways and help in controlling blood sugar levels.

Mutagens are those chemicals that change the genetic makeup of the DNA by causing mutations. Biochemical compounds found in cloves, like phenylpropanoids, possess anti-mutagenic properties. These were administered on cells treated with mutagens and they were able to control the mutagenic effects to a significant rate.

Ayurveda describes certain plants to be effective in developing and protecting the immune system. One such plant is clove. The dried flower bud of clove contains compounds that help in improving the immune system by increasing the white blood cell count, thereby, improving delayed-type hypersensitivity.

Cloves are of interest to the medical community due to their chemo-preventive or anti-carcinogenic properties. They may have a future in cancer treatment.

This is just a few of the amazing properties of cloves. This nondescript spice packs a big punch. Best of all…tis the season for cloves!